About Aprilia Scooters Top Comparisions Upcoming News Reviews Videos Dealers
Aprilia was founded after the second world-war in Noale, Italy. It produced bicycles then, and the first motor vehicle from the company was a 50cc motorcycle in 1968. The first scooter it ever produced was called ‘Amico’. It was Italy’s first all-plastic scooter and was made in the early 1990s.  Aprilia is famous for their motorcycles that compete at the highest levels of road racing; it is one of the most winning marques in road racing.
The Piaggio Group that owns Aprilia (among other brands) also has a strong scooter portfolio. It has entered the Indian market with a 150cc scooter that promises to be the quickest scooter among the ones manufactured in India. It also has on sale in the Indian market the scooter with the largest-displacement motor in the SRV850.
It looks at growing in the Indian market by tapping into the fastest-growing segment of them all, the scooter segment. The SR150 leads this endeavour, and different versions of the SR will help grow sales. All Aprilia products are sold through Piaggio’s Motoplex showrooms that also sell products from Vespa and Moto Guzzi, its sister brands.
Read more We've got a rematch on the Aprilia vs Suzuki scooters - but this time the Aprilia has returned in a new avatar, the Race. Is it enough to dethrone the Access? The Aprilia SR150 is good, but luckily for us enthusiasts of the brand, it wanted to have the quickest scooter around, in line with the badge on it and all it stands for. This thought process led to the creation of the SR 150 Race – a model that sits above the standard... 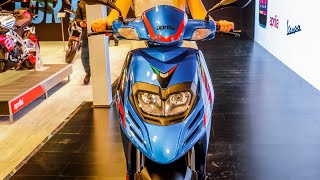 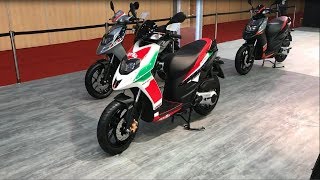