Triumph Daytona 675R is a bike with the last known price Rs. 12,62,269 in India. It had 1 variant and 2 colours. It came with anti-locking braking system and both front and rear disc brakes. 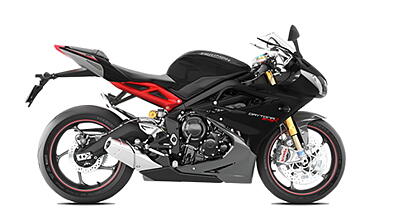 The Daytona 675R is the only sport bike in the Triumph range, but that doesn’t mean it is a halfhearted effort just to be in the numbers game. This 675cc bike is a lethal machine that replaced the original Dayton 650 in 2008. Of course there have been a lot of changes to the bike since then and the 2013 model that we get in India is leaner and more powerful.

The looks of the Daytona are quirky – that does not mean we don’t like it. Let us just say it is a typical Triumph; and it is so despite the fact that it is all-plastic unlike rest of the lineup. The tank is well sculpted, while the front is bulgy with split headlamp which is almost a standard feature on the 600cc bikes. The rear is the most elegant bit of the motorcycle with simple lines and a narrow tapering end.

The Dayton 675R is also powered by a three-cylinder engine and no awards for guessing that it displaces 675cc.  The in-line triple is good for 126bhp @12,500rpm and 74Nm @11,900rpm making it one of the quickest bikes in its segment. The motorcycle rides on 120/70 R17 front and 180/55 R 17 rear tyres, with twin 310mm floating discs (4-piston Nissin calipers) for front and 220mm Brembo single piston caliper disc for rear. With the change in regulations, the 2013 Dayton 675 comes with switchable ABS as standard.

The Daytona 675R is assembled in India at the company's completely-knocked-down (CKD) unit in Haryana.