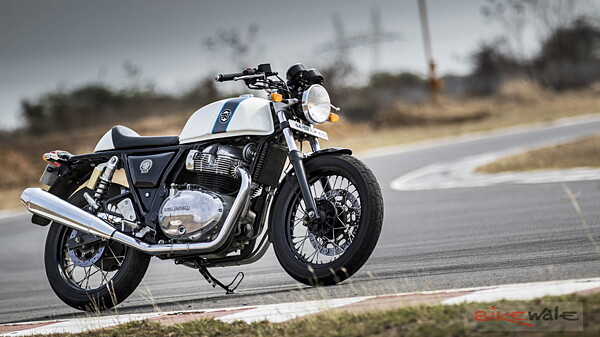 The Royal Enfield Continental GT 650 is the racier version of the Interceptor 650. Featuring lowered clip-on handlebars, elongated fuel tank, single seat with cowl and rear-set footpegs, it follows a classic café racer design language. And since café racers are basically lightweight and powerful motorcycles designed for speed and handling, they can be referred to as street bikes of that era.

That being said, the Continental GT 650 is an old-school street bike present in the modern age and thus qualifies with this year’s track day theme of street bikes. But don’t let that old-school tag mislead you into thinking that the GT 650 is a slouch. It packs an all-new 648cc parallel-twin motor that rides on a wide wave of torque and it has the ergonomics that are just perfect for the track making it a formidable contender. Astride the bike, as you take it off the side stand, one is bound to feel every kilogram of the bike’s 198 kg weight. It’s a heavy bike, of course, and not something that you’d be thrilled about as you head out of the pits onto the track. However, going easy around the corners initially will get you accustomed to the bike. Also, the crouched riding stance does help in taking that weight away quite a bit. That because you’re closer to the central mass of the motorcycle by becoming a part of the motorcycle rather than being on it.

And once that sync is achieved, you are in for a treat. The GT 650’s motor might not be a fast one, but it sure does lurch ahead with a heavy thrust every time you open the throttle. While cornering, the GT 650 is like a mature motorcycle that demands respect and proper coordination of hand, feet and mind to pull off a smooth corner. It’s like riding a wave of momentum that needs to be delicately surfed through the fast and slow corners of the track. All the above words mean that while the GT 650 has a good pair of brakes that offer a strong bite, the suspension bits of the motorcycle don't quite favour pushing the bike. As you squeeze the front brake lever before entering the corner, the front forks dive down, upsetting the balance of the motorcycle which results in carrying less speed into the corner. Consequently, as one opens the throttle while exiting a corner, the soft setup of the twin rear shocks doesn’t inspire much confidence to gas out faster. You are made to think whether the bike will keep to the desired line or not. Lastly, due to this setup, one needs to be alert when attacking kinks between C3 and C4. The bike tends to weave as a significant part of the weight gets shifted to the rear, thus lighting the front end and compressing the rear shocks further. Well then, is the old-school street bike any fun to ride on the track? Absolutely. Provided your goal is not going all blazing around every corner. It is a bike that lets you lean deep into corners at decent speeds. The twin cradle frame was developed in conjunction with Harris Performance, a subsidiary of Eicher Motors. And it lets you carry out a good lean angle although the feeler bolts at the bottom of the rider footpegs do scrape at some point. But these footpegs come with springs and can fold upon contact with the tarmac.

The steering geometry of the GT 650 is not quick, but not too sloppy either. This means that while it won’t turn at the slightest whiff of steering input, it will also require a proper consistent input in order to achieve what is expected. With the right entry speed and a proper line, the GT 650 can be a charm around corners as its riding stance lets you slide out of the seat and tip the bike into the corner without worrying about its weight or momentum taking over. The Continental GT 650 is a mature yet modern motorcycle that has definite racetrack desirability. Out in the real world, the GT 650 is better off as a weekend bike rather than a daily runner. In the same manner, out on the track, it might not be a fast cornering bike, but it can surely pull off some sweet smooth lean angles.

It is a bike that makes you feel good and lets you understand as to what happens or can happen when riding a motorcycle through a corner. It is a motorcycle for someone who wants to acquire additional skill in riding on a racetrack before jumping onto faster and more powerful bikes.